Humans are curious by nature. Otherwise, why would we want to know what is the farthest planet, the brightest people, the most expensive things? Especially we are attracted by everything that is unavailable to us. Or not?

There are several aspects that truly make a good microphone. First of all, pay attention to the tone curve. Some mics have a very neutral tone, while others could bring quite specific tones because they all serve different purposes. Some microphones are very dark, meaning the top end of the frequency spectrum is rolled off, such as the Coles 4038. Some microphones have an upper midrange push like the Manley Reference C. So before choosing a microphone, decide on your intentions.

Transient response is also essential. It means how well the mic is going to transmit such sounds as consonants, drum or strings’ plausive sounds. As a general rule of thumb, the heavier the capsule, the slower the transient response. Then, the pickup pattern. You may have already figured out from other articles here that it influences from which side the sound is actually recorded. Once again, determine your needs and then choose a mic with an appropriate pickup pattern.

Another aspect is the proximity effect. The degree of proximity effect is based on the type of capsule and the means in which the air pressure is ported, with every mic build yielding slightly different results. It is not an aspect that should be extremely high or low – once again, it should simply match your preferences. And, lastly, saturation – probably the most complicated aspect here. It is quite hard to explain it with words, but simply speaking, it is a quintessential end of all the frequency and sensitivity features of the device that give it a unique sound. It’s like the personality of a mic. So which microphones are the best in all these categories and the most expensive ones? Let’s find it out. 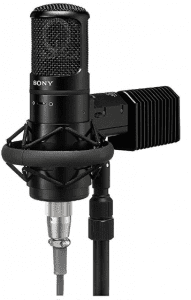 And our battle of titans is opened by this excellent item by the Japanese Sony company. So what’s so special about this item? It is often considered as the best microphone on the planet and often used in film production. It is also amazing for the vocal recording, though it is sometimes used in the live performance by the top artists.

The design of this microphone is special and unique. It is constructed with a dual large diaphragm that captures true vocal qualities and reproduces them. The 6AU6 vacuum tube warms sound quality and a Peltier cooling system ensures the optimum operating temperature. In fact, this is a vintage mic with really powerful characteristics.

It was firstly released in 1992. It didn’t take long until the item was noticed by the leading recording studios and used to record top R’n’B, Pop, and Hip Hop artists, because of its bright and detailed sound. Artists like J. Cole, Dr. Dre and Eminem have been known to record using the C-800G. Kanye West even used it to capture his subdued flow on “Through the Wire”.

There are two polar patterns that C800G Pac has: cardioid and omnidirectional. The cardioid pattern sounds really great for recording the vocals and voice, and the other one, omnidirectional, is great for recording the acoustic instruments since it captures room tones and ambient sounds. There is also a cooling system built-in in the microphone, that reduces internal noise and eliminates distortion. The quality of each recording is truly impressive.

Utilizing the same capsule design as the Neumann K67 large-diaphragm condenser mic, the C800G offers a silky, brilliant quality without a hint of harshness. A hand-selected 6AU6 vacuum tube provides a pleasantly warm and smooth sound at the low-mid range and gives a perfect end to the record. The microphone also has a high sensitivity of -33 dB/Pa.

This microphone is a rewind version of a famous predecessor released in the 1950s. You can tell by its appearance that it is a vintage microphone. This is the exact replica of that vintage microphone, though if you would buy the same version with a more modern look, you would pay less. 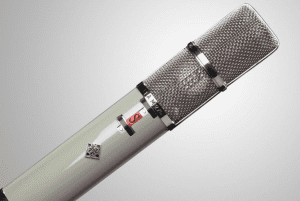 The microphone has 3 polar patterns what makes it a multi-tasking microphone for recording a range of stereo techniques, including Spaced Pair (A/B), XY (including Blumlein), ORTF array, and Mid-Side (MS). The ELA M 251E includes an edge terminated, dual backplate CK12 capsule capable of cardioid, omnidirectional and bidirectional polar patterns, a New Old Stock 6072a vacuum tube and a Haufe 14:1 ratio output transformer (the same found in the AKG Acoustics GmbH C12).

With no doubts, this microphone will serve you for years. It can sustain thousands of performance and remain its wonderful quality and that’s why so many leading companies and artists choose it. The low end is extended and focused, its mid-range response is detailed, and it offers a silky top-end, making this new ELA M 251E a go-to mic for vocals and acoustic instruments.

Now you have probably noticed that vintage microphones actually prevail in the list of the world’s most pricy microphones. This one is by the legendary Neumann company which is known to be an excellent manufacturer of the audio devices. It would be weird if we didn’t have it here. So, here it goes – U47 microphone – the 3rd most expensive mic in the world. 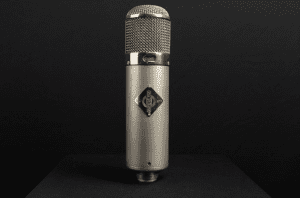 It is a condenser microphone. If you decide to acquire it, then include the original carbon box, power supply, microphone mount, and Pelican case for the entire setup.

The original model of this mic was released back in 1947, and it was the first switchable pattern condenser microphone. Then, it actually has become the most revered vocal microphone in history inspiring dozens of attempts to recreate its sound. But not all the devices by far are able to produce the same sound even until today.

The microphone has two polar patterns: a cardioid or omnidirectional one. The leverage to switch between the patterns was located right in the microphone and worked by disabling the polarization voltage to the rear diaphragm. The U-47 did not maintain equal output levels across patterns. In fact, this was one of the characteristics that engineers of the company managed to improve in the following models of this brand.

The U-47’s output was 5dB hotter in cardioid mode than in Omni, because the capsule’s rear diaphragm was simply disconnected in cardioid mode, avoiding the capacitance losses of having it in the circuit. That became a reason for changes in the design of the original mic, a FET condenser intended to sound the same as its tube-amplified sibling.

There are also some modern technologies in the microphone, such as plug and play  VF-14K vacuum tube to the BV8 output transformer. The mic has its distinguishing sound – the warm and smooth mid-range, robust and deep bass, and airy treble as the finishing touch. The frequency response is 20Hz-20kHz, max SPL is 138dB, impedance is 200 ohms. So here you get not only an extra-powerful gear to record your vocals, but also a product with an affluent historical background.

Another magnificent recording tool by Neumann. The previous one was a U47 and this one is U67 – a more upgraded version of its predecessor. You probably are curious to find out the whole story behind all these legendary microphones. So, in 1958 Georg Neumann received the information that the company, manufacturing the tubes for the mics was no longer going to produce any of those. He could use his moment and place the final order for a batch of tubes, and their lead engineer Dr.-Ing. Gerhart Boré began to design the successor to a microphone that is still revered as one of the top vocal mics of all time.

By the way, this kind of success, when a company beats its own record is quite rare in this industry, but Neumann proves that there is no limit to perfection. Where to start describing this item? Well, first of all, it is extremely versatile. Whatever source you are going to record – doesn’t matter if its drums, acoustic guitar, vocals, opera vocals, podcasts, voiceover for a movie – everything will end up with excellent quality. 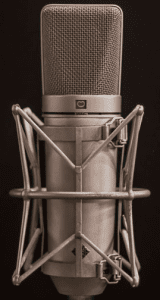 The response of the microphone is truly impressive, with a slightly highlighted midrange (but that’s how it should be, especially for vocals). The -10dB pad helps protect the capsule, a better backplate creates an accurate figure-of-eight pickup pattern and a tapered head grille helps reduce capsule resonance from both directions. The microphone is omnidirectional. By the way, Led Zeppelin used this microphone to make their recordings.

There is an internal filter further that makes the bass-boost feel smooth and creates an effect of proximity and also a smaller EF86 tube fits perfectly into a slimmer body of the microphone, while new lathe technology allows that body to be tapered.

Another interesting fact that the design of the microphone turned out to be so unique that Neuman even patented it. No need to say that many manufacturers were taking their inspiration from this item which was released more than 50 years ago. The K67 is employed in both the modern U67 and U87 microphones.

In its time, this microphone made a real revolution in the audio-recording devices and determined the design of mics for the 60s era. At first, it was named the U60 because of the year of creation, but later, it was renamed into U67. Ironically, the successor to the U67, the FET powered U87, was released in 1967, completing a rare trifecta of incredible microphones from Neumann.

And here we have the winner – the most expensive microphone in the world! Could you think it would be this one? Have you heard of it before? Prices for this item vary from $20000 to $25000. What we know today, is that the original most expensive version of this mic is currently for sale in Moscow, Russia. 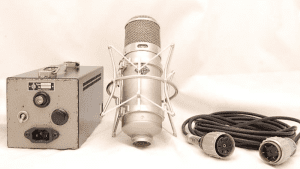 Probably, by the name of this item you can guess that it was first released in 1947. It has a revolutionary quality for its time until the production of it stopped in the 1960s. Today all the models of this mic belong to collectors and they are quite rare. Also, one of the reasons for such a high price is the order in which components are placed in this microphone. It is quite authentic and gives a mic a specific sound and that’s why it is so rare.

Nowadays, of course, you can find cheaper versions of this mic released not so long before. They are lower in price and give great sound. Concerning the recording, the microphone, just like the Neumann U67 is eligible to record all kinds of sounds – vocals, acoustic instruments, drums, voiceovers and many more. If you want to compare the quality just check out YouTube – there are a lot of examples of how the older and new versions of this mic sound. 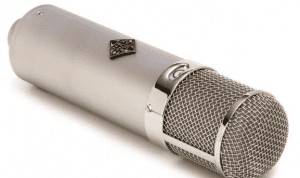 One of the things that made the original U47 such a smash hit in the first place was its switchable polar pattern. Loaded with a dual-diaphragm capsule, the Telefunken U47 condenser microphone gives you a chance to choose from cardioid or omnidirectional polar patterns. In addition to shaping the pickup area, these patterns also subtly change the sound of your mic, and that gives you the ability to set ou your mic as perfect as possible to capture the sound from the source you want.

It is incredible that so many technologies have changed since the time when the first Telefunken U47 was released but against all odds, it maintained its excellence. The original M7 capsule, as well as the military surplus VF-14M tubes that formed the heart of the U47,  are long gone. But Telefunken classic sound remains. That’s why the company developed a new set of components, ranging from the plug-and-play VF-14K vacuum tube to the BV8 output transformer. Hold them up side-by-side and you’ll be hard-pressed to tell a vintage U47 from a modern one.

You may also like: 7 Best microphones for piano recordings